For an avid beachcomber, no day planner is complete without penciling in a few dates with Mother Nature (permanent ink is preferable). As stated in an article that appeared in a former edition of NASGA’s newsletter, Shorelines, “Ideal dates for beachcombing outings are often attributed to ‘being in the right place at the right time,’ yet enthusiasts do not have to depend solely on luck or chance to experience fruitful searches (Winter/Spring, 2013).

This article continues to focus on fluctuations in the usual volume of nautical remnants that wash ashore in a coastal area as the direct result of natural phenomena, notably recent storm activity, flooding, and the phase of the moon and state of the tide.

Tracking the phase of the moon and state of the tide, both independent of one another, as well as in unison, is not only valuable for determining potentially preferable times to beachcomb on a daily basis but can inform collectors of infrequent instances of natural phenomena that are particularly ideal for sea glass hunting. As most hobbyists are aware of, low tide, or the period when high tide begins to recede, up until the tide is at its lowest level, is much more desirable for beachcombing than during high tide, when turbulent waves pull the remnants deposited ashore back into the ocean.

Although the general difference in the magnitude of daily tides is often not particularly significant, the moon, which is the primary gravitational force that determines tidal conditions, reaches a perigee in each of its 28-day elliptical orbits, defined as the moon’s closest point of approach to the earth. At perigee, or on the specific day of each month in which the moon is closest to the earth, a heightened tidal range ensues, producing slightly more preferable conditions for beachcombing.

Additionally, twice per month, during the new moon and the full moon, the earth, sun and moon are nearly in line, a phenomenon referred to as a spring tide, which also produces an increase in the average range of tides. However, when the occurrence of a new or full moon (spring tide) coincides with the time of the month in which the moon is closest to the earth (perigee), an even greater impact on the tides results, known as a perigean spring tide, an uncommon incidence that transpires an average of three to four times annually (during the spring and fall months). Finally, and even more miraculous and infrequent than the occurrence of a perigean spring tide is the manifestation of a proxigean spring tide, a rare, unusually high tide. This very high tide results when a perigean spring tide coincides with the moon’s closest approach to the earth within an eighteenth month (or longer) period and may result in gravitational pulls so strong that the earth can experience extremely powerful high tides, often twenty to twenty-five percent higher than those that result from normal perigean spring tides (NOAA).

For those who wish to reserve a date with Mother Nature, the following charts list the dates of future perigean and proxigean spring tides through 2023 (again, using permanent ink is preferable)! 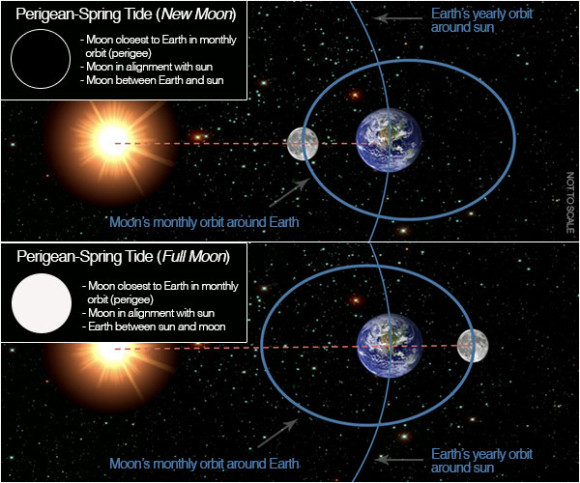 About three or four times a year, the new or full moon coincides closely in time with the perigee of the moon—the point when the moon is closest to the Earth. These occurrences are often called ‘perigean spring tides.’ The difference between ‘perigean spring tide’ and normal tidal ranges for all areas of the coast is small.  In most cases, the difference is only a couple of inches above normal spring tides.  Image and caption via NOAA.

**Conditions can be more intense during a new moon since both the Sun and the Moon are on the same side of the Earth, and with the Moon near its closest point to the Earth, the tide- making potential is highest.  Note that there are two scheduled for 2018 and none in 2022.

Find out more about Supermoons and Spring Tides in the coming year, visit Earthsky.org article for more info.