Long, long ago, when dinosaurs roamed the earth and the skies were pierced with cries of enormous birds, something was happening geologically just below the water. Unusual formations in the silt and mud began to take shape that would, millions of years later, reveal themselves and wash up on the shores of the Chesapeake Bay. These “formations,” resembling hollow rock balls, tubes, ocarinas, and more avant-garde shapes, are created from sand, clay, and iron oxide.

When my family and I first moved to the shores of the upper Chesapeake and roamed the beaches in search of beach glass, we also began to find peculiar, round, metal-like objects.  We felt certain they were a type of ammunition for guns used during the Revolutionary War because George Washington had munitions created in the Principio Iron Works just a heron’s flight across the bay, near the port of Charlestown.

Being new to the area and excited to show our finds to our neighbors, our newly found friends chuckled and told us that the strange formations were called ‘pop rocks,” small hollow stones of which our neighbors would toss into beach fires and watch them explode. Another neighbor told us that the formations (are) derived from ‘Indian paint pots” and that Native American tribes used the iron oxide inside the stones to paint their faces. But it was not until we met another neighbor, and now long-time friend, Alice Lundgren, that the mystery was solved. The formations, in all their various shapes, are known as “concretions.” 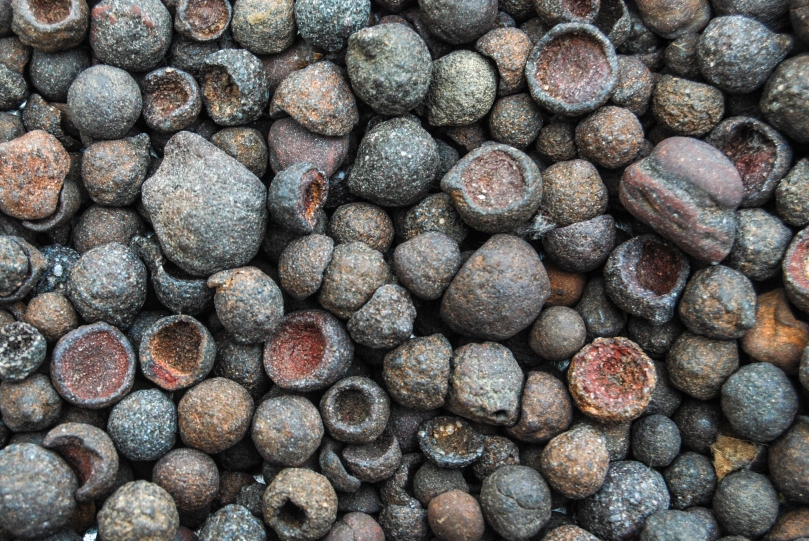 Alice has a collection of well over a thousand concretions ranging in size from a quarter of an inch to about twelve inches, all of which she has gathered from the bay. Alice was a true inspiration to my family and me, and we soon joined forces to not only hunt for sea glass, but to eagerly search for concretions. These unusual rock formations date back to the late Cretaceous and Eocene eras.  Even more fascinating than the “pop rocks” are tubular rocks. The tubular concretions are iron oxide formations that reflect a pipe-like structure.

When we go exploring along our nearby beach, Alice, a seasoned concretion seeker, has the ability to spot the stone tubes instantly, yet the rest of us are not so fortunate, as the finds appear camouflaged to the untrained eye. Some of the concretions boast unique shapes, such as small cups, snowmen, and acorns while the tubular concretions often resemble coral, branches, and even small musical pipes (although they do not carry a tune))! Similar to sea glass, each concretion seems to carry its own story and personality.

Having been formed millions of years ago from sedimentary rock, concretions have been significant and mystical to many cultures. Some cultures believe them to be holy stones while other cultures believe the stones bring luck, or perhaps represent the divine feminine. However, theories of modern science suggest the concretions are fossils or meteorites.

As beachcombers, we are treasure-hunters.  We are always seeking the next great find. The Shard of the Year Contest, which is one of the highlights of the North American Sea Glass Association’s annual Festival, would be ideal opportunity to view both natural and manmade treasures (this year’s North American Sea Glass Festival will be held in Wildwood, New Jersey on October 27 – 28).

*Many thanks to Alice Lundgren for sharing her collection of concretions, and to Meredith Keating and Brandon Boas for their photography.